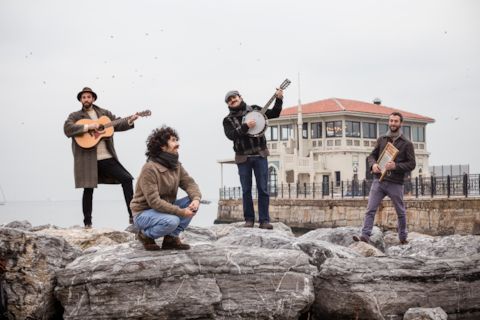 BLOUZouki is an international world music band originally formed in Istanbul, in 2012. The band’s leader, Hugo Labattut, is a French singer, songwriter, musician and composer. His music is heavily influenced by his travels; he takes inspiration from making new discoveries and the places he visits shape his songwriting and lyrics. Indeed talking to local people, listening to their stories and turning them into songs is what BLOUZouki is all about: Labattut uses his songs to paint a portrait of the world he sees, in a musical style that embraces blues, swing, chanson and more.

Having been born on the streets of Istanbul, BLOUZouki travelled all over Europe before settling in its current home, Lisbon. The band’s latest album, “Uncle Joe”, was recorded in Istanbul in 2019 with an ensemble of international musicians, many of them Turkish. To present that album and more to Lisbon audiences, Labattut is now joined by Daniel Ribeiro on guitar, Rafael Morgado on double bass and Alessandro Tomei on drums.