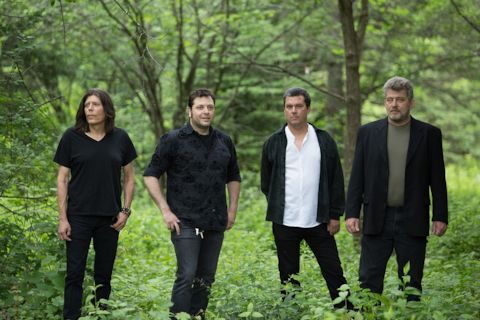 Chasing Colors are all original members of the 1980s and early 1990s Minneapolis, Minnesota original rock band, The Colour.

The band released their first ever CD and Digital Album EP available to the public July 18th 2015 and have achieved success getting radio airplay, impressive music reviews and are gaining many new fans.

The band has renamed themselves, Chasing Colors…So much more appropriate as they are still reaching for their musical dreams!! Chasing Colors back in the day were compared to The Cure, U2 and even The Cars. Surprisingly, Louie Paretta (Lead Vocals/Guitar), David Wagner (Bass/Vocals), David E. Paquette (Drums/Vocals) and Scott Patton (Lead Guitar/Vocals) have written and professionally recorded original songs all throughout their careers but were never able to get past handing out their cassette demo tapes out to fans at live shows. They had a good shot with a record deal when local talk radio host Terry “Griff” Griffen was managing the band. Unfortunately, Terry passed away from leukemia and with hard times, the band broke up.

In the last two decades, Louie Paretta, David E. Paquette and Scott Patton were active in the local music scene together as well as on their own. A little later on Louie moved to Georgia, had a go at it but later moved back to Minnesota. He played with local musicians including Dave E. Paquette while Scott Patton had moved to California, played in bands there, and after a decade moved back to Minnesota. In 2014 Scott and Louie talked and got the original band back together including Dave Wagner on bass guitar who had taken a two decade hiatus from the music scene. Now they are back and already writing and recording their second album as well as performing live shows.