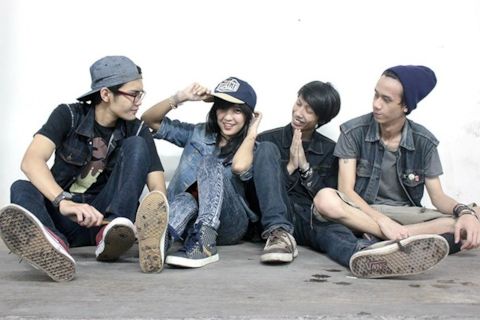 Clossiana is a Alternative Rock and many. Also touched by a bit of Pop Punk. The member is Ristiana Shinta (Chacha) as a vocalist, Regiansyah (Regy) as Bassist, Nico Giorgio (Jojo) as Drummer and Zen as a guitarist. Formed in May 2013 by Zen who wish to have a more distinct group outside lane loud music. Then he invites Ganjar a friend from his high school for join the group. Looking for a woman as a vocalist, getting Jenny as a vocalist and Jojo as a drummer, He is former drummer of Ganjar past band. Shortly Ganjar out from Clossiana. Then Jojo interesting Yusuf as Bassist but Yusuf also leave the group. Then come Joe a blues pop guitaris, replaced Yusuf as a bass player but he leave again after excuse for out of town. Regiansyah are now as a bassist, drawn by Jojo, his neighbors. Jenny decided to quit after recording of the first song of Clossiana. Jojo back finding new vocalist. Come Ristiana former Jojo vocalist. And all the songs she's take over, start a lot of concepts and material for the album "Blinded"

Clossiana used to play of Tonight Alive, Paramore, We Are The In Crowd and PVRIS and Muse songs. Until we're getting boring and start creating songs. Blinded is the first album Clossiana after a lot of personnel replacement.