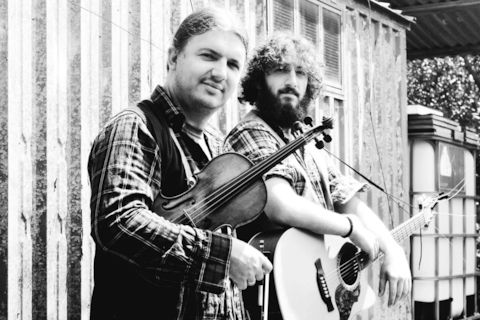 The Aroostercrats began playing on street corners and bridges in Verona, the city of Romeo and Juliet, entertaining passers by with their unique, original blend of americana/irish folk music. The duo became good friends in 2008, while studying classical violin at the Conservatorio di Musica in Verona, and in 2009 branched away from tradition to form The Aroostercrats.

Lukasz began the violin at the age of 8 and gave his first public solo performance at the age of 9 with the orchestra of the Radom School of Music. After his schooling days he then toured all over Poland for 4 years starting in 2001/02 with a Polish reggae band playing guitar as well as the violin.

Mark’s musical bone started to grow at the age of 4 when he began playing piano and a year later he also began learning the violin. During the following years he added the trumpet and vocal studies to his repertoire and since moving to Italy in 2007 has added the guitar and harmonica.

They have now played throughout Italy including festivals in Ferrara, Grezzana and Lecce and travelled to Ireland to play on BalconyTV Cork where their video of "Nowhere Train" remained in the Global Music Rumble top 100 videos and is now an editor's pick.

2014 saw Mark and Lukasz achieve the highest honors (110 lode) finishing their diplomas in classical violin, the release of their second album "Nowhere Train", BUSK2014 Busking Festival in Bolzano and a European tour travelling through Germany, Switzerland (opening for the Hackensaw Boys (US), Sweden, Norway and Czech Republic, ending in Treviso Italy playing on the Jack Daniels Stage during the "Home Festival" 2014.

In 2015 The Aroostercrats played at the Paradies Festival Obervinschgau in Malles opening for Hans Söllner (DE), opened for Lydia Loveless (US) of Bloodshot Records during her European Tour and made their way into the final round of Video Festival Live 2015 in all of Italy. They also had a taste of London UK playing on Sofar Sounds.