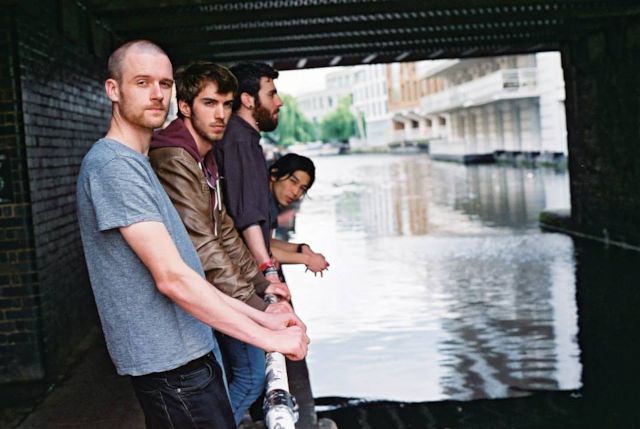 We had a chat to Matt (bassist), Luca (drummer) and Dan (guitarist) from Remote View about music, movies, and life as an unsigned band.

Hey, so thanks for taking the time to have a chat to us. Let's start by talking about your background. Did you grow up in musical families?Matt - My brother used to play the drums in a ska-punk band, but neither of my parents are particularly musical. I'm no Anoushka Shankar that's for sure.

If you had to use a movie to describe your music, what would you pick and why?Matt - Commando, because it's all about letting off some steam, Bennett.
Luca - I'd say Boogie Nights by Paul Thomas Anderson. Like Boogie Nights our music is groovy and well polished, but also a bit nasty.

Every band has influences, so as a music fan, what was it about your influences that captivated you when you first heard them?Matt - One guy that really influenced me was this guitar player called Aki who had a residency at the Jazz Cafe in Edinburgh where I lived for a few years. I remember during his solos, I always got this profound feeling of inner tranquillity and I thought if music can make someone feel like this, then hey, I want to be a part of it.

What do you think your fans like about you as a band?Matt - I don't know, they probably just fancy the lead singer I suppose.
Luca - I'd say our biggest strength is to be unpredictable. We like to have a different approach every time we write new material, and that's why our music ended up reaching such a broad spectrum of genres. On stage as well, where we like to be as spontaneous as possible, we always try deliver our music differently, depending on what kind of vibe we get from the crowd.

Of all of your songs, which is your favourite and why?Matt - My favourite song to play is probably "Better Place". Although it's a really simple tune there's something about the lyrics that really resonate with me.
Luca - I love "Waiting Too Long". The guys wrote that particular song before I joined the band, so I actually feel allowed to say the song is absolutely brilliant!

How would you describe life as an unsigned band?Matt - It's hard having to do all the leg work ourselves whilst not letting it affect the quality of our compositions and performance. On the plus side, we don't have to make any concessions; we can be what we want to be.
Luca - Hard. In a city like London, where there are thousands of bands willing to play, venues don't really tend to respect unsigned acts like us, and that makes it difficult to present your music live at your best. This is frustrating sometimes, because, for bands like us, playing live is very often the best way to catch people's attention and to have new people listen to our music. In addition to that, a lot of promoters care more about how many people you're bringing, rather that the music you're gonna play, and getting paid for a gig is very often out of the question. On the plus side though, we've had a lot of lovely people supporting us, and helping us out just because they genuinely liked the music. That always makes us feel happy about the project and gives us the strength to carry on doing it, and in a way it makes it up for all the s**t we have to deal with on a regular basis.

Is there anything you have learnt about the music industry since starting out that you didn't know before?Matt - I've learned that there are people out there looking to capitalise on young musicians' naive ambition. We've done gigs where we've brought our own gear, brought the paying audience, provided the entertainment and haven't been given so much as a soft-drink. Greedy, small-time promoters really inhibit the growth of young artists, and it's slowly sucking the life out of the London live music scene.

What has been the highlight of your gigging career so far and what's your dream venue?Matt - Even though we've been all the way to the Netherlands, I still think our best gig was at home at the Good Ship in Kilburn. We organised a night there and got our mates' bands to play, packed the place out and made a few quid to put towards recording a single. My dream venue would probably be the moon. Imagine the mosh pit!
Luca - Not long ago, we had a great gig at the Barfly in Camden. We were the closing act at a late night gig that featured a bunch of very heavy bands. They were all fantastic bands, but we really didn't know how we could live up to the crowd expectations at that point, since we really are not even close to being as heavy as all the other acts that were playing that night. In fact, pretty much as soon as we started playing 90% of the people left *laughs*! Yet, after a few minutes a lot of different people from downstairs started coming in, and by the end of the gig the room was packed again. The best thing about that night was that the crowd filled up the room just because they heard us playing from next door, and they felt attracted by the music. We were incredibly happy and we felt very close to the audience at that gig.

Ok a few questions not related to music, what are your passions outside of music?Matt - I am a severe advocate of the artistic merit of video games as a medium for narrative fiction. And no, I am not a sweaty nerd. Gaming gets a bad reputation for being a mindless waste of time - and rightly so because a lot of games are just that - but there are games out there which tell beautiful and relevant stories just as well as, if not better than, film or literature.

What is the worst job you have ever had?Matt - I worked as a warehouse assistant for a company that hired out furniture for big corporate events. I remember spending weeks sanding and oiling their entire stock of wooden patio furniture by myself whilst listening to Magic FM. There's been few times in my life when I've felt closer to insanity.
Luca - When I was working in a call-centre. That was definitely the worst job I've ever had!

Ok now back to music, last summer, some of you went on a busking tour around Europe right? Can you tell us a bit about that? What motivated it, where did you go, and what did you get out of the trip?Dan - well...after the previous relatively uneventful summer, Raph and I decided to try it. I've done a busking trip before and used to tell the guys of the adventure that we had, so last summer we just went for it. It was quite a daunting prospect mainly because we didn't have very much money so we had to succeed in making some off the street.
It was rough, tough, we slept in parks and under bridges and most of the time in a sort of squatters community.
We left from Ghent in Belgium and hitchhiked our way to Switzerland.
I love a trip like that because it really is an adventure. We never know where we're sleeping when we hit a new town. It is scary...not going to lie, but it feels amazing to get to travel even when we don't have much money...and the few times that we do well on the street, spending money made from music on beer, food...feels absolutely amazing.
And we made so many new amazing new friends. I guess I am not always the most outgoing person in the world so it is nice to travel and play music because it opens people up and it makes it easier to meet new strangers.

Find out more about Remote View and watch their video for "Don't bother" below: