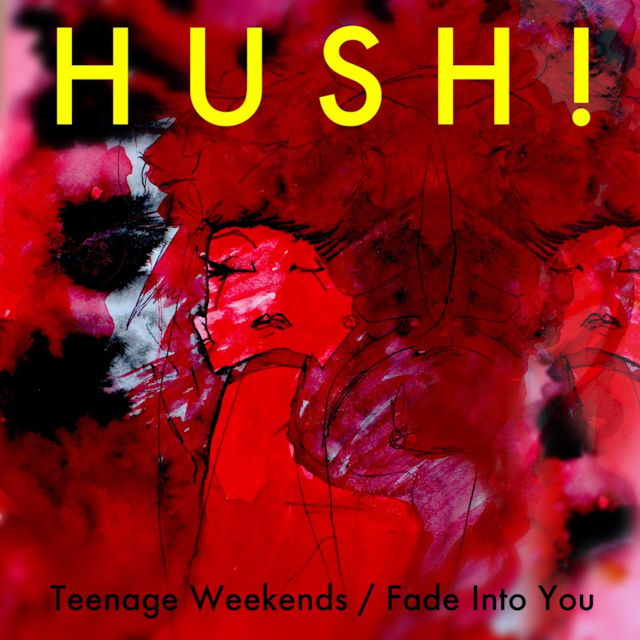 In this review, I'm going to be exploring the latest single from the band Hush, (stylized Hush!) entitled 'Teenage Weekends'. The outfit has recently signed with the acclaimed label Fierce Panda Records, and the song has actually been spun on BBC Introducing as well as receiving airplay by Steve Lamacq on BBC Radio 6 music. Thus, Hush has some wonderful things going for them. Is the new track worth including in your own library, though? Let's find out.

For the purpose of this review, I listened to 'Teenage Weekends' in an actual recording studio, and because of this, I experienced the new track on a quality sound set-up. Obviously, not everyone has access to industry grade studio monitors, but everyone who listens to this track does owe it to themselves to don the highest quality headphones or speakers they can get their hands on. 'Teenage Weekends' is a beautifully produced track with an immense amount of small intricacy in its sonic landscape.

'Teenage Weekends' floods the listener with atmospheric synthesizers, heavily reverberated instruments, and brooding, eerie vocals. If I were to align them with a known act, I'd argue there is a parallel to New Order to be made here. (I would say Joy Division, but Hush has a distinct 'pop' flair to their music, something New Order experimented with more than Joy Division did.)

Thus, the production of 'Teenage Weekends' is a marvelous affair. It's perfectly orchestrated, it's anthemic, and there isn't a note gone awry despite the depth and complexity of the effort. Typically that kind of depth isn't also associated with accessibility, however, which is what makes Hush particularly unique. This is a weighty song with enough pop sensibility to still be played on BBC Introducing.

The band aligns themselves with lo-fi and shoegaze music, a notion I'd actually contend. 'Teenage Weekends' is an incredibly well produced track, one that definitely isn't within the realm of "lo-fi". The aforementioned accessibility turns away from shoegaze as well, because shoegaze tends to be rather difficult to enter. 'Teenage Weekends' is a track you can play over and over on those beautiful summer nights this season while blasting down the highway with the windows down.

There's a lot to adore about 'Teenage Weekends'. It's one of the better tracks the independent scene has produced in the last several months, and I think it absolutely concretes Hush's relevance and potential longevity. One can only hope that their new partnership with Fierce Panda can continue to produce great music!

Listen to 'Teenage Weekends' below, and find out more about Hush!