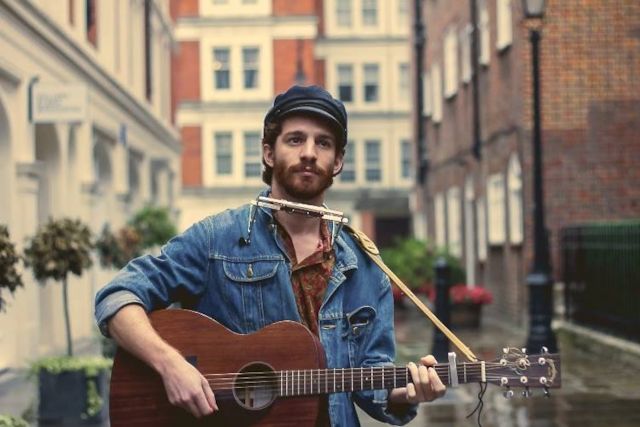 Enter The Western Traveller, a Parisian folk performer who has put out some new tunes recently. The name is the moniker of Ben Campani, a folkie donned with a Martin triple zero guitar, rolled up strings, and a harmonica rack. His inspirations are clear: Bob Dylan, Robert Johnson, Neil Young, Leonard Cohen and the like. His music is remarkably refreshing and marks a clear and actual return to the roots of folk. Let's dig into 'Kings & Queens'.

'Kings & Queens' is a finger plucked acoustic ballad, akin to the early Bob Dylan works. To compare him to a more recent work, I'd align The Western Traveller's folk style to that of Oscar Isaac in the recent Coen Brothers film, 'Inside Llewyn Davis'. Vocally, the Traveller has a bit of Cat Stevens in him. Obviously, that's never a bad thing.

The sparse instrumentation benefits the music immensely. This take on folk music needs to embrace a high level of brevity. Anything more than soft crooning and cat-claw fingerpicking would compromise its pursuit of a classic sound, and it is a 'classic' sound. As aforementioned, modern folkies don't necessarily perform in this style. It's slowly coming back, but it'll be a long time before this is a style that's mainstream again. That's a good thing; The Western Traveller isn't soiling his vision for a quick buck.

True folk music is hard to come by. True folk lyricism is equally as difficult to find. The Western Traveller combines both of those in a masterful performance on 'Kings & Queens'. It's a soft reminder that folk isn't dead, it's just sleeping. Music like this wakes it up, and that's something we should all get behind. Check out 'Kings & Queens' now to support an incredibly exciting artist. With an EP currently in the works, his catalogue is certainly expanding into something worth writing home about.

Listen to 'Kings & Queens' below, and find out more about The Western Traveller!